Crypto Funds Expected to See a 40 Percent Downfall in 2019

The report released by Crypto Fund Research shows that there were only 145 cryptocurrency funds before 2014. The growth since then has been commendable and the number of funds launched per year almost quadrupled in 2017.

2018 again saw a small spike in the growth chart, but as projected, the numbers might fall flat by as much as 40 percent. 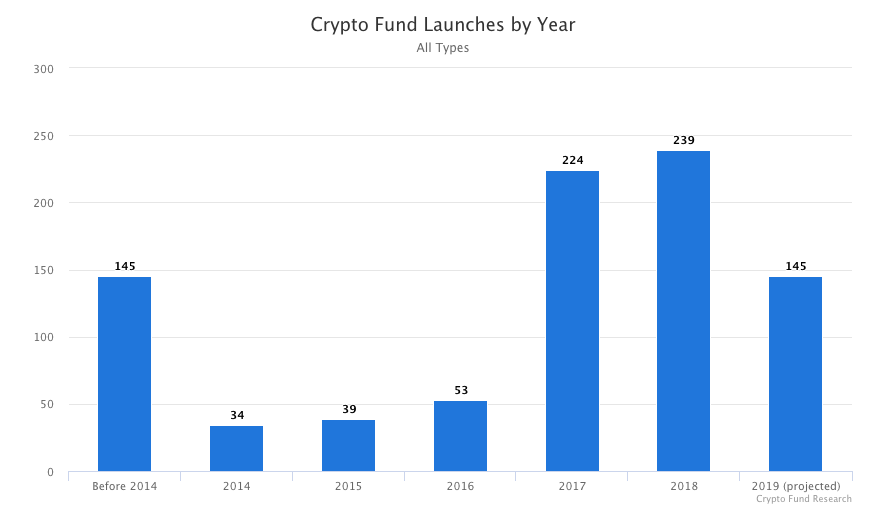 The study showed that there were a total of 769 cryptocurrency funds currently in operation. Of these, Venture Capitals numbered to 372 and Hedge Funds were 350. Private Equities only shared three percent of all the funds.

A whopping 53 percent of these cryptocurrency funds have less than $10 million in assets under management, the report noted. However, there are also funds like Pantera Capital, Galaxy Digital Assets and Alphabit Fund who command more than $100 million in assets. Inclusively, they still result in less than one percent of the total hedge fund assets.

Crypto Fund Research indicated that despite the drop in the number of funds, the collective asset under management has grown significantly. In the first quarter of 2019, valuation of cryptocurrency funds skyrocketed by 40.54 percent and now stand atop $14.35 billion.

This increase, according to the study, was mainly due to three reasons: launching of new crypto funds, net inflows to existing funds, and changes in the value of portfolio assets.

As can be predicted, almost half of these were based in the United States. But the United Kingdom, China, Singapore, Canada, Australia, and Germany also shared a significant number. Eastern Europe, Russia, and offshore jurisdictions like the Cayman Islands were noted as growing hubs for crypto funds.

In the United States, only 104 of the crypto funds were registered under the SEC. This is partly due to the fact that most of the funds are small and only qualify as an exempt advisor, which do not need to be registered. However, the SEC is likely to present more guidance on the registration of cryptocurrency funds in the coming times.