On April 9, 2019, Parity Technologies’ UX lead Thibaut Sardan announced the beta launch of the company’s light client. Instead of downloading the entire Ethereum blockchain, Fether offers users a much quicker experience by relying on full nodes rather than direct interaction with the blockchain. The desktop wallet is still in beta, but interested parties are invited to inspect the myriad issues that still need to be resolved.

What Is a Light Client?

A light client is a piece of software used to improve the user experience when interacting with various blockchains. It is two tiers away from a blockchain, just after full nodes. But as many in the crypto space are aware, downloading and syncing entire nodes takes time and resources. At current, the Bitcoin and Ethereum blockchains take up 210 and 181 gigabytes respectively.

Block size can indeed be adjusted within a full node, but the technical knowledge needed to safely “prune” a blockchain leaves much to be desired. As such, a multitude of alternatives have popped up to meet mainstream demand. Such services include Geth, Parity, and Ciri to name just a few. Geth and Parity clients also operate as full nodes, but can reportedly be pared down for quicker deployment.

The beta launch of Fether, however, need only be downloaded and run in your desktop’s background. In a Medium post, Thibaut Sardan said that “it will quietly and swiftly sync the blockchain to be ready anytime you need it.” 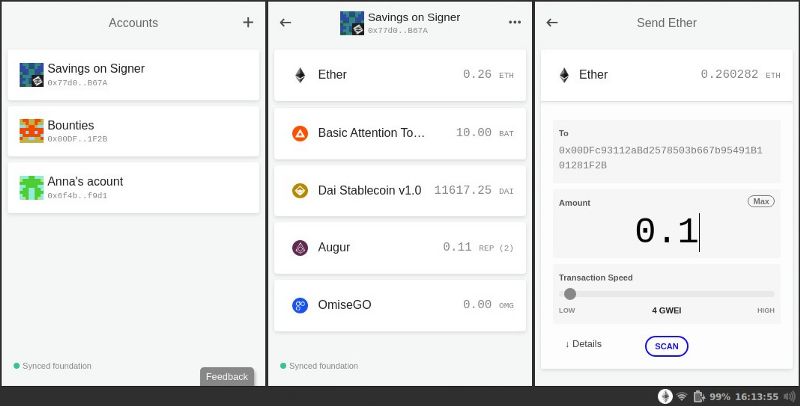 Since the alpha launch of Fether in November 2018, this next iteration offers an improved user experience, syncs directly with the Ethereum mainnet and implements Parity Signer, a mobile application that can turn a smartphone into an air-gapped crypto wallet.

To implement the Signer, users need first to reset their smartphones to factory settings and then install the application. The application will not correctly operate unless the smartphone is then switched back to airplane mode. From there, interested parties can then connect the Fether client with the Signer via a QR code. Transactions made using the Signer will allow users to sign-off on any ETH and ERC20 operations offline to ensure greater security.

Sardan has also included a list of small improvements still up for grabs for the crypto community. These range from “annoyance” to “enhancement” and “nicetohave.” As the product is still in its beta phase, it is recommended to avoid storing large quantities of cryptocurrencies until an audit is performed.