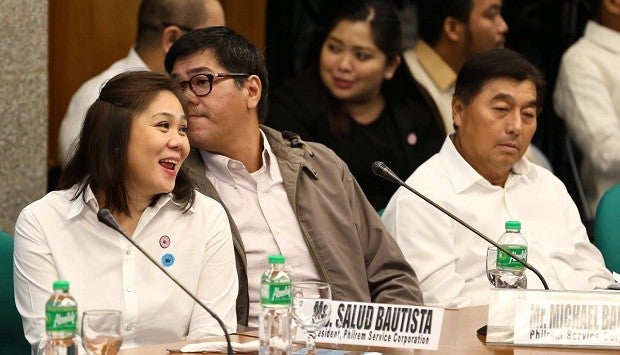 Salud and Michael Bautista with Wlliam So Go at the Senate hearing April 5, 2016 on the $81M stolen funds from the Bangladesh Bank and was deposited to accounts in RCBC. LYN RILLON/INQUIRER FILE PHOTO

The Anti-Money Laundering Council (AMLC) on Wednesday filed in the Department of Justice (DOJ) a complaint against three top officers of Philrem Service Corp., the company that delivered to casino operators most of the $81 million stolen from the Bangladesh account in the Federal Reserve Bank of New York which ended up in the Philippines.

Named respondents in the 17-page complaint were Philrem president Salud Bautista; her husband Michael, the company’s board chair and treasurer, and Anthony Pelejo, the firm’s antimoney laundering compliance officer.

The complainants composed of AMLC officials led by Deputy Director and Compliance and Investigation Group head Vencent Salido charged the Bautistas and Pelejo with violation of Section 4(a), (b) and (f) and its second paragraph, Section 9(b) and (c), and Section 14(c) of Republic Act No. 9160, or the 2001 Anti-Money Laundering Act.

The Senate conducted several hearings on the theft and routing of the money through the country’s banking system, particularly the Rizal Commercial Banking Corp. (RCBC) which processed the illicit funds despite earlier signals not to do so.

In February, hackers caused the illegal transfer of $81 million from the Bangladesh Bank account in the Federal Reserve Bank of New York into four fake accounts at the RCBC branch on Jupiter Street in Makati City. From the four accounts, most of the funds were funneled into a fifth account.

About $61 million was converted to pesos and deposited in Philrem’s RCBC peso account.

The AMLC said Pelejo had reported on Feb. 17 that the owner of the fifth account, one William Go, had availed himself of Philrem’s services to withdraw $80.9 million, convert it to pesos and remit it to local casino operators.

But the real William Go, a businessman, turned up and denied owning the account.

Salud admitted at the last Senate hearing that the instruction to transfer funds from the fake Go account had come from RCBC Jupiter branch manager Maia Deguito.

A casino operator, Kim Wong, also testified in the Senate that he had received P400 million and $5 million from the Bautistas. The couple, on the other hand, said they delivered P600 million and $18 million to another operator, Weikang Xu.

The AMLC said that Philrem being a remittance company the Bautistas, were duty bound to apply the “know your customer (KYC) rule” and to keep identification records when they dealt with the owner of the fake Go account to whom a large part of the stolen funds were transferred.

“What is highly irregular is that respondent spouses claimed they were dealing with Deguito, and not the ‘owner’ of the [fake Go account],” the complaint said.

The AMLC said the Bautistas were aware the funds were not legitimate when they deliberately ignored the AMLA requirements to conduct a KYC and keep a record of customer information.

“Had they done so, respondent spouses would have personally interviewed the real William Go and discover that the latter was not aware of the existence of the RCBC [account under his name],” the complaint added.

The AMLC said the Bautistas’ delivery to Xu was self-serving and probably not true so the couple still had to account for $17.1 million that is missing.

Disclaimer: Comments do not represent the views of INQUIRER.net. We reserve the right to exclude comments which are inconsistent with our editorial standards. FULL DISCLAIMER