Will a politician have the courage to make the case for measures to deliberately redistribute from rich to poor if only to correct the redistribution that has taken place in the opposite direction as a result of QE? 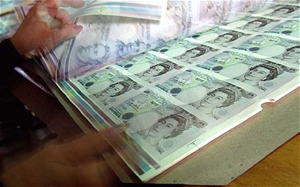 The British public are not aware that the rich have become much richer, while the poor have not gained at all, as a direct result of the policy of Quantitative Easing (QE) – which is essentially ‘printing money’. However, it is not a secret. Most people inside the Westminster bubble should know.

QE has cross-party support and is credited with having prevented even worse an economic calamity than the UK has experienced since 2008. It has had, as a predictable side effect, a dramatic redistributive effect in favour of the rich.

Since QE started in 2009, the richest 10 per cent of households are on average each between £100,000 and £350,000 wealthier as a direct result of the policy. These gains do not appear directly in their bank accounts. They have been made in the value of their financial assets e.g. property, shares, paintings, antiques etc.

The reason why QE has increased asset prices is not straightforward but at root it is that, as a result of printing more money, the value of money itself diminishes and so the value of other financial assets increases.

The sources which back up the figures above are impressive – the Bank of England and the Office for National Statistics. The story was reported in the Guardian, the Spectator, the Mail and the Independent in late August 2012 but seems not to have been covered in the media since then.

Fraser Nelson, the editor of the Spectator, has described QE as “the biggest transfer of wealth to the rich of any government policy in recent documented history”.

QE is a significant part of the reason why, at the same time that most of the UK is undergoing the worst squeeze on living standards for over 80 years, some parts of the economy are doing fine. Large corporations are sitting on record cash mountains; shareholders are currently experiencing the FTSE’s best period of growth for 30 years; property in places like London is doing well; it’s a good time for people who invested in paintings, antiques, fine wine or racehorses. The luxury market – from cars to handbags – is booming.

Since 2009, governments – first Labour and then the Coalition – have, through QE, been engaged in an unprecedented money printing operation on an extraordinary scale. All the numbers involved in QE are huge. Since 2009 the Bank of England has created at the click of a mouse £375 billion which it has used to buy gilts (government debt).

To give some perspective, £375 billion is equivalent to around a quarter of the country’s total GDP or a third of its national debt. There has been remarkably little parliamentary or press scrutiny of QE, in marked contrast to Budget measures which are often small beer in comparison.

In August 2012 the Bank of England released a report with the snappy title, The Distributional Effects of Asset Purchases. It explained that the effect of QE had been to boost the value of financial assets e.g. property, shares, antiques etc. The report calculates that the QE program at that time – and there has been £50 billion more QE since – had increased the value of the financial assets in the UK by no less than £600 billion. It noted that that sum was equivalent to around £10,000 for every person in the country if everyone had the same amount of financial assets.

However, such assets are not shared equally.

The report does not spell out the actual distribution of the £600 billion windfall among the population but it is possible to work it out by looking at the ONS data on wealth distribution. The journalists who reported the story in August 2012 did the maths. Their figures for how much each of the top 10 per cent of households had benefitted from QE range between £100,000 and £350,000.

As QE has made the rich richer it has widened inequalities that already existed – not only between rich and poor but also between young and old, the South East and the rest of the UK and so on.

The richest 10 per cent of households have received a windfall gain from QE. This week it was reported that millions of the poorest people in the UK are struggling with the costs of food. Will a politician have the courage to make the case for measures to deliberately redistribute from rich to poor if only to correct the redistribution that has taken place in the opposite direction as a result of QE?

As you’re here, we have something to ask you. What we do here to deliver real news is more important than ever. But there’s a problem: we need readers like you to chip in to help us survive. We deliver progressive, independent media, that challenges the right’s hateful rhetoric. Together we can find the stories that get lost.

We’re not bankrolled by billionaire donors, but rely on readers chipping in whatever they can afford to protect our independence. What we do isn’t free, and we run on a shoestring. Can you help by chipping in as little as £1 a week to help us survive? Whatever you can donate, we’re so grateful - and we will ensure your money goes as far as possible to deliver hard-hitting news.