Click here for The Motley Fool's resources on Coronavirus and the market.

John Maxfield
(JohnMaxfield37)
Author Bio
I write about banks, trying my best to balance the good and the bad.

At the end of last week, American Express (NYSE:AXP) reported fourth-quarter results that showed a decline in both its top and bottom lines. Shares of the credit card giant are down since the news, dropping by 2% over the intervening days.

American Express earned $825 million in the three months ended December 31, down 8% from the year-ago period. Thanks to stock buybacks, the drop wasn't as significant on a per-share basis. Its earnings per share declined 1% year over year, coming in at $0.88. This was well below the $0.98 earnings per share expected by analysts. 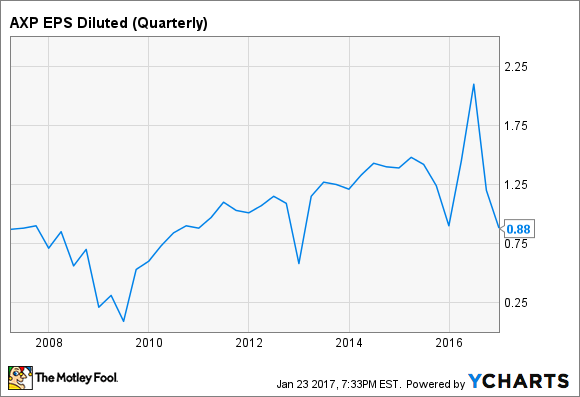 The news was slightly better on the top line. Analysts were looking for total fourth-quarter revenue of $7.95 billion, which American Express bested with actual revenue of $8.02 billion. Though, like its bottom line, revenue fell on a year-over-year basis, dropping 4%.

"At the start of 2016 we said we would move with a strong sense of urgency to change the trajectory of our business," said Kenneth Chenault, chairman and chief executive officer. "We are ahead of plans to reset our cost base and improve our operating efficiency. We were able to make substantial investments to capitalize on opportunities in the marketplace and strengthen our competitive position."

The challenges facing American Express are numerous, but two stand above the rest. In the first case, the company lost its exclusive agreement to supply credit cards to Costco members last year, supplanted by Citigroup and Visa. The relationship, which lasted for 16 years, accounted for approximately 1 out of every 10 American Express credit cards in circulation in 2015 and for 20% of the company's loan portfolio.

And in the second case, the competition in the credit card industry has increased over the last few years. The popularity of JPMorgan Chase's Chase Sapphire Reserve Card is a case in point. The premium card offers atypically generous sign-up and travel rewards (though they'll soon be cut) and, as such, is aimed directly at American Express' traditional customer base.

It's for this reason that American Express is focused on reducing expenses. Consolidated expenses were $6.2 billion, down 2% from $6.4 billion a year ago. That's good, though it's worth noting that the prior-year expenses included an impairment and restructuring charge of $419 million as well as Costco-related rewards costs. The reason it didn't drop further this year, in turn, stems from substantially higher levels of investment spending on growth initiatives, notes American Express' earnings release.

The best news was that the credit card company's remaining customers are using their cards more than they did last year. "Card Member spending (adjusted for Costco and the impact of foreign exchange rates) grew 7% in the fourth quarter," noted Chenault. "That increase reflects continued strength in our international markets, accelerated growth among small and mid‐sized companies and strong long‐term relationships with higher spending consumers."

American Express is also continuing to grow its customer base. It issued more than 10 million new cards in 2016, and added more than a million new merchants to its network in the United States.

Going forward, American Express expects to earn between $5.60 and $5.80 per share in 2017. The outlook "is designed to put us in a strong position for 2018 and the years ahead," said Chenault.